Previously, we’ve discussed anterior cruciate ligament (ACL) reconstruction surgery and the importance of prehab after sustaining an injury to your ACL. No athlete wants to injure their ACL but there is good news for athletes who may have injured their ligament. There have been advancements in ACL surgery that Dr. Ahmad and Team Ahmad are at the forefront of that can help get athletes back to playing sooner! 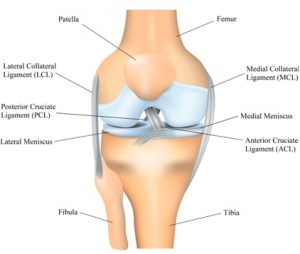 It was first reported in 1903 by Mayo Robson that the ACL could be surgically repaired and patients could remain hopeful that they’d have a good outcome. Over a century later, surgeons are able to perform 3 different types of surgery to help a patient with an injured ACL: primary repair, repair with augmentation, and reconstruction. Typically, after a reconstruction, athletes return to sport-specific activity around 6 months post-operatively with full participation on the horizon. Complete, unrestricted return to play may take up to a year. After a repair, return-to-play is nearly half that of a reconstruction!

The ACL is the main stabilizing ligament of the knee. When it tears, the knee may feel unstable or loose. The athlete or patient may not be able to fully bear weight on the injured knee. If they try to participate in athletic events, further injury may occur such as cartilage damage or meniscus tearing. The way the ACL tears plays a role in surgical intervention. Think of the ACL as a rope attached to two bones. If the rope tears through the middle completely, it creates two free ends that are like the ends of a mop. This type of tear will not lend itself to a repair and requires a reconstruction for the ACL to work again. Should the rope tear off the bone rather than in the middle, a repair is possible.

If the ACL is able to be repaired, physical therapy is able to progress much quicker when compared to a traditional reconstruction. Patients that have a repair could return to sport specific activity potentially as early as 4 months after surgery! ACL repairs are an innovative surgery and can only be used in certain situations as previously described. Our Team is working on new research to help healthcare professionals have a better understanding of ACL repairs and returning athletes to play!