The legendary Leo Mazzone, the long-time pitching coach for the Atlanta Braves and Baltimore Orioles, has a simple directive for pitchers who are looking to avoid arm injuries – throw more often but with less exertion.

It’s a philosophy he derived from his days as a pitcher in the Braves minor league system working under Johnny Sain. Appearing at the Baseball Health Network’s April 11th seminar at Professional Baseball Instruction, Mazzone asserted that pitchers need to throw in order to stay healthy. 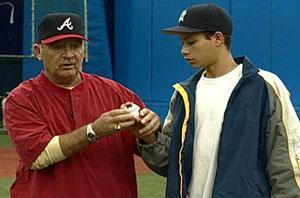 Mazzone knows from whence he speaks – during his time with Atlanta (1990-2005) his pitchers had a history of remaining relatively injury free while dominating the National League’s Eastern Division.

Three of his pitchers – Greg Maddux, John Smoltz, and Tom Glavine – have been enshrined in Cooperstown.

The guy knows his pitching.

“Throw more…with less exertion,” he repeated over and over to the coaches, scouts, parents and players who were in attendance. “In Atlanta, our pitchers went to the mound more often to practice their craft at 60’6” going downhill to a catcher. The difference was that we controlled their effort. That’s because our goal was to find out what the effort was going to be on the pitch. We wanted to find out what the maximum effort was that we could put on the pitch without actually maxing out.”

Mazzone has written two books on pitching. His Pitch Like A Pro, published in 1999, was kind of revolutionary for its time. “The (Braves’) throwing program is so simlpe and yet so imaginative,” he wrote. “It dictates that you pitch on a regular basis with a carefully regulated effort. The key is knowing how to throw between starts without going all out on every pitch.”

At a time in which baseball has fallen in love with power arms (is there a team in the major leagues without at least three arms in the bullpen capable of throwing 95+ on a consistent basis?

By regulating the intensity of a pitcher’s throws, Mazzone pointed out that the end result was not only a smoothing out of a pitcher’s mechanics, but more often than not, the control improved dramatically.