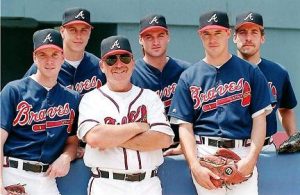 Baseball Health Network members Dr. Christopher Ahmad and Leo Mazzone were among the members of an all-star panel at the “Tommy John Town Hall Meeting” on June 28 in New York City.

Tommy John, the man for whom the celebrated surgical procedure was named was also joined by Dr. Glenn Fleisig from the American Sports Medicine Institute, moderated by WFAN’s Ed Randall.

Among the many highlights –

* Tommy John saying that in all the years since his surgery, not one MLB pitcher who’s undergone the same procedure has ever reached out to him.

* Leo Mazzone on one of his secrets to pitching without injury – “Pitchers should throw more often, but with less intensity. Throw a lot so that you find your max effort you can put on a pitch without maxing out.”

* Tommy John remembering an instance in which renowned player agent Scott Boras said that Tommy John doesn’t know what he’s talking about when it comes to the surgery that bears his name.

* Dr. Christopher Ahmad on studying Tommy John surgery technique under legendary Dr. Frank Jobe – “As he began an operation, Dr. Jobe turned to me and said, ‘I’ve done so many of these procedures…I think I’ll do this one left-handed.’ The joke was on all of us in the operating room, since he was, in fact, left-handed.”

* Dr. Glenn Fleisig – “There was a recent study that demonstrated that overexertion on full-speed fastballs and not curve balls were the cause of the majority of arm injuries.”

Proceeds from the event went to Ed Randall’s Fans For the Cure.